The islands are beautiful as they have white sand, crystal clear waters, plenty of beaches, and marine life. In addition, there are limestone cliffs, caves, and stunning viewpoints. The food, nightlife, markets, and fests are full of life. So, let’s have a look at its diverse history.

A Brief History of Phi Phi 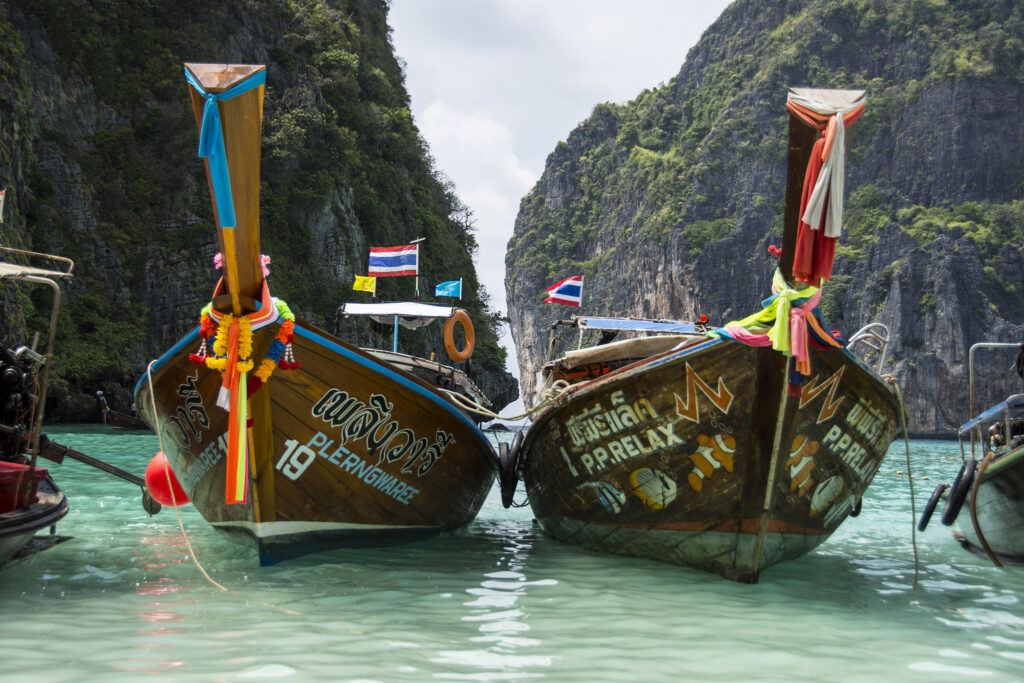 Let’s have a look at all the aspects of the historical significance of Phi Phi Island:

The Urak Lawoi tribe of Chao Lay sailed the Andaman seas for 300 years. The word “Urak Lawoi” means “men of the sea.” And well, they traveled and traded here. They inhabited the islands almost 100 years ago. There is plenty of evidence of archaeological discoveries that the Phi Phi islands have the oldest communities. It dates back to the prehistoric period, and it believes that the most senior community lives on Phi Phi Islands.

Phi Phi Don is the largest inhabited island of the Phi Phi Islands. The primary residents of this island were Thai Malays, the fishermen who later became coconut planters. It was in the 1940s that they fully started living here. The population was majorly Muslim, accounting for 80 percent of the total. But, currently, there are more Buddhists than Muslims in Koh Phi Phi Don.

4. How did Phi Phi Become so popular?

So, the Phi Phi islands major tourism started in 2000. All the credit goes to the shooting of the movie “The Beach,” which was a British-American movie. The display of beautiful islands made the island very popular for tourists and travelers from around the world.

Unfortunately, the movie witnessed lots of criticism because of its acts. The locals claimed that the crew uprooted plants and devastated the Koh Phi Phi le. Also, they polluted the island to make it look like the book the movie was inspired from.

The devastating tsunami originated in Sumatra island, Indonesia, and traveled to the Indian Ocean Tsunami in 2004. The tsunami is also known as Christmas or Boxing day, as it occurred on Sunday morning, December 26, 2004. It devastated the coastlines of India, Sri Lanka, Thailand, Indonesia.

The seven-hour-long tsunami wiped off almost 4000 people on Phi Phi islands. Nearly 70% of the buildings were crushed. A refugee camp at Nong Kok sheltered permanent residents of the islands.

Thai staff with 68 members and 3500 transient backpackers volunteers were recruited by “HI PHI PHI.” All these volunteers went back to the islands and started the cleaning and rebuilding process.On February 18, 2005, a second organization, Phi Phi Dive Camp, was set up to remove the debris from the bays and coral reef in Ton Sai Bay.

The majority of buildings deemed fit for repair by government surveyors had been repaired, and 300 businesses had been restored. “Hi Phi Phi’s” work was acknowledged by many, and it was nominated for the Time Magazine Heroes of Asia award.

As of December 6, 2005, nearly 1,500 hotel rooms were open, and the Thai government had installed a tsunami early-warning alarm system with the help of volunteers.

Over time many travelers have come to Phi Phi Island for trade and settling here. So, the Phi Phi islands are majorly Buddhists, Thai Chinese, Muslims, and sea gypsies. The mixture of cultures makes this place a reason to celebrate. There are no religious conflicts. The rural areas have prominent Muslim populations. Muslims came to Thailand during the 13th century with the help of Arab Traders.

Locals of Phi Phi islands launch annual boating launching ceremonies. There are lots of artists with special music and dancing skills. The common arts are batik and pineapple paper available in local markets. The resident’s peak “Thai” language and minority know English too.

Thai cuisine is one of the top five cuisines in the world. Many recipes from around the world influence the Thai food on the island. The southern Chinese immigrants brought their food idea to the islands and invented Thai cuisines.

It is believed that a Buddhist monk brought Indian touch and spices to Thai cuisine. Also, European, Portuguese, Muslim, Japanese, and Dutch traders brought their food specialties. This results in iconic Thai cuisine.

Today Thai food is its own, with a special unique blend of the five tastes: sweet, sour, bitter, salty, and spicy. So, don’t forget to try this mix of Thai cuisines when you’re at Phi Phi Islands. All the bars, cafes, restaurants, and hotels have famous vegetarian and non-vegetarian options for Thai food.

You can take up a certificate course for all activities. Visit local markets and relax with stunning views and pretty sunsets. There are plenty of beach games, and the locals are lovely. Keep the islands clean and have a very sustainable trip.