Apart from the natural scenic beauty, Phi Phi islands are famous for various festivals and events. The vibes during such times are iconic and once-in-a-lifetime experiences. Besides, it’s also a great way to learn about the traditions, customs, and rituals of Thai culture!

You can schedule your vacation during such times as it’s a for-sure ticket to extra fun during the trip. Coming to Phi Phi festivals, the island has a lot to offer. This includes:

Chinese new year is a famous festival that celebrates the start of the new year on the Lunisolar/solar Chinese calendar. The vibrant festival focuses on new and good while removing the old and bad. Throughout this event, you are likely to witness attractive decorations, good food, delicacies, firecrackers/fireworks, and so on.

Besides the above two traditional names, Visakha Bucha is also called Buddha Jayanti, Buddha Day, or Buddha Purnima. Clear from the name itself; it is celebrated to mark the birth, insight, and death of Lord Buddha. As it falls during the full moon of the sixth lunar month, you can plan your vacation accordingly. It is usually celebrated in the month of May.

The ambiance is peaceful during this day as you are likely to witness the candlelit processions within the monasteries. Everyone will be nicely dressed up, with the majority of them wearing whites. People go to temples before dawn to hoist the Buddha flags too.

Usually celebrated in July, Asalha Puja ( Asadha Puja or Asanha Bucha) involves giving donations to temples and monks along with Buddha sermons. Asalha Puja Day is one of the holy days of Buddhist culture. The festival is celebrated on the full moon of Āsãdha month and is quite famous in Thailand. 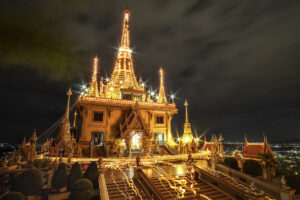 During this day, people chant the scriptures of this event in Pali. Most temples arrange religious activities to discern this occasion, so it would be eye-candy to watch! Also, Asalha Puja is the perfect way to reflect their content intensely.

Loi Krathong is the most beautiful festival of Thai culture. It is where people come near lakes, canals, and rivers to honor the Goddess through the water. They do so by releasing flowers, incense, candles, and lotus rafts in the water. Loi Krathong falls around November, i.e., the night of the 12th lunar month.

It’s the time of the year when the full moon glistens in the sky with its rays. The gorgeous sky plus glittering candles and decorations in water is oh-so-perfect. The festival is so mesmerizing that you wouldn’t be able to stop yourself from clicking pictures. Make sure to plan the trip around Loi Krathong for the Insta-perfect posts and pictures!

Songkran is a Thai New year festival that is celebrated every year on 13th April. The term Songkran comes from the Sanskrit word “movement.” Basically, the day is acclaimed to ensure love, compassion, gratefulness, and kindness through the medium of water. Besides the beauty of the festival, it’s actually a fun fiesta! You are likely to see people splashing water at each other. Some of them also use water guns for additional fun.

Other than that, the festival also involves Buddhists visiting temples and pouring water on the pictures of Buddha. They also pour water in the Buddha’s hands in due regard. Overall, the festival is a combination of fun and affection in one place.

The Chao Le Boat floating festival is celebrated in Ko Lanta during the full moon night (sixth and eleventh lunar months). Basically, the rituals are performed by sea gypsies where small boats are decorated and released to the sea. Inside the boats, people put wooden dolls with nail clippings and hair bits that are said to take away the evil with themselves.

Once the boats are released in the water, a local dance is performed around the boat. This dance is called Ram Rong Ngong. The festival is unique compared to other festivals, so it’s worth experiencing it at least once!

Laanta Lanta festival is celebrated every year in the old town of Lanta islands. Besides being a tropical paradise and having rich biodiversity, the festival adds extra oomph to the place. During this festival, the island people and ethnic groups thank each other while showing their own culture.

If you check out the stalls, you will see that it’s filled with local art forms, including the Batik painting. Additionally, you may witness fine cultural arts like Toi Pa Nun, which includes handcrafting through Toi leaves. It’s a paradise for the explorer in you, who likes good food, artistic performances, and a relaxing atmosphere.

Krabi Boek Fa Andaman Festival means “opening the Andaman sea”. Clear from the term; it marks the beginning of the tourist season in Thailand. The season starts in about November and ends in February. Throughout the festival, you are likely to enjoy various performances of musical and cultural genres.

It also organizes various water sports competitions, including longtail boat races, sea kayaks, and many more. If you want to buy souvenirs for home, then checkout the open-air market of Krabi town that has plenty of them available. The travel distance between Krabi and Phi Phi island is just 45 km on a boat or ferry. 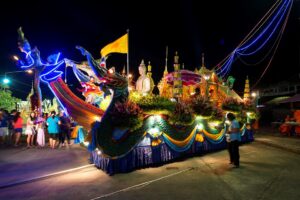 Chak Phra Festival is celebrated around October, i.e., the first day of the waning moon in the eleventh lunar month (according to the Thai lunar calendar). The term “Chak Phra” means “pulling the Buddha.” It marks the end of the Buddhist rain of three months and the return of Buddha.