Besides being the place where the Leo DiCaprio movie (the Beach) was shot, Phi Phi island is heaven on the earth. The scenic beauty, refreshing beaches, and greenery can ensure the perfect vacay to Thailand!

Besides that, Phi Phi Island has the nicest people as hosts. Not only are they welcoming but also helpful. Throughout your trip, you would feel as if you were in your hometown. Let’s know more about Phi Phi island people here:

The Population of Phi Phi Island

Back in the 1940s, Phi Phi island was home to Thai Malays fishermen. Thai Malays are the ethnic Malay citizens of Thailand. They are the sixth-largest ethnic group in the country. While initially it was populated by Malays, later the place became a coconut plantation.

In Phi Phi Don, around 80% of the total population is Muslims. At present, the Buddhists dominate the Muslims if we include the transient workers. As of 2013, the island is home to around 2000-3000 people and is a great tourist spot.

Phi Phi island is a part of Thailand, and hence you cannot expect anything rude from the country. That’s because Thailand is the land of smiles. People are extremely friendly, helpful, and always smiling. Regardless of how chaotic the situation is, the locals deal with every problem with a beautiful smile on their faces. Their kindness is the reason why you wouldn’t stop yourself from visiting the island again. 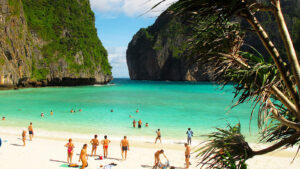 No matter who assists you! Be it hotel owners, restaurant owners, or the porter; you wouldn’t see them being aggressive or rude. The same goes with ferry/boat drivers, who are equally helpful. You must be wondering that it’s quite obvious for them to have friendly behavior. That’s because the island is dependent on the tourism industry. While it’s true, this isn’t solely the reason behind their friendliness. They are genuinely affectionate and kind to everyone.

One of the best things about this captivating island is that locales are always willing to help. Say if you lost directions or can’t reach any destination, they will come forward and direct you with the same. They are also very soft-spoken. This adds extra serenity to the composed atmosphere of the beaches.

Besides that, they will also help you out to make the vacation even more promising! Say you are on a solo trip with little knowledge about food to try. Simply ask the local sellers, and they will guide you through the must-haves of Thai cuisines.

Similarly, the ferry drivers are polite too. If you ask them, they will inform you about the history, cultures, and customs of the place. Likewise, they will also tell you about the places that are worth visiting.

If you visit the island during any festival, you wouldn’t feel like a foreigner. They treat their visitors like their own residents. You will be able to take part in the festivals/events just like the Thai population. The locales are extremely welcoming and salutary.

As Thai society is very polite, you will always see them as well-mannered and respectful. They are dressed well in casual attire and quite relaxed. You will hardly see them screaming and shouting if things didn’t go according to plan. 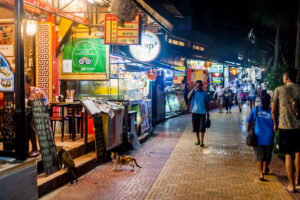 Speaking of their greeting gestures, the locals greet through the traditional method where they put their hands together near the chest along with a slight bow. To pay respect to another person, they say “Wai.” It’s best to replace those handshakes or waves with a Wai as it’s their method of greeting people.

Being a tourist destination, many people speak English on the island. However, the main spoken language in Phi Phi island is Thai. While it isn’t necessary, you can always learn a little Thai to greet the locales. They will surely feel great with such salutation.

Make sure to learn primary things like “Hello” (Sawasdee in Thai). In the Thai language, both “Hello” and “Goodbye” are the same word. However, the terms may differ as per gender. For example, for women, you will have to say sà-wàt-dii khâ. Likewise, for men, the word is sà-wàt-dii khráp.

However, if you aren’t comfortable with the same, go for English. Be it hotels, restaurants, or stores, most of the people in these places understand English.

Things You Should Know About Thai People

As Phi Phi island has an extensive Thai population, they follow the traditional Thai culture. Before planning a trip to the country, make sure to check some of the common things about the same:

People in Thailand consider their family first. If you ask a Thai person about their siblings, they may say a number that’s too high. However, it’s quite likely that they are counting their cousins too. That’s because Thai people consider their cousins as close as siblings.

The families are quite different from the ones that you must have seen in western cultures. It’s quite common for them to live in an extended family. Even the ones who leave their native place for work do not lose connection with their family.

Thai people are quite self-controlled. They wouldn’t throw a tantrum or show negative emotions publically. Note that they might show these emotions in private, but most of them do not make a scene in front of people.

You are likely to hear them saying ‘mai balen rai”. This means “no worries, no problem.” You can sense from the sentence how carefree they are! Again, this doesn’t mean they do not care about anything at all. Of course, they do. But they do not create drama out of complex situations.

3. Monks are Respected a Lot

Never disrespect a monk whatsoever! They are highly respected in Thai culture. This especially goes for females, who have to be extra careful of their actions.

For example, they should not put any offerings directly into the monk’s hand. Instead, they should keep it in their dish. Likewise, they shouldn’t sit next to monks or their personal possessions. Keep these things in mind if you ever meet a monk.